Dragon Age II is conducting a very expensive experiment. They're trying to figure out if RPG players notice or care if you reuse the same locations.

In all of Kirkwall, there appears to be one kind warehouse, one cave, one house, etc., no matter where you go. Sometimes you enter through one door and the bad guys are in the north end; sometimes they're in the south end. In one really wacky case, you enter in the middle and there are bad guys in both the north and the south! Woo.

The answer for me is YES, I NOTICE. It's tremendously disappointing.

In their defense, the combat is a hell of a lot better. Faster, crisper, and I'm playing a mage now, so I'm like Calvin---this is my autobiography where my hands shoot lightning. Story is bland, and my hero is honestly kind of a tool, but knocking off quests is more fun than washing dishes, so I'm still playing. (And the dishes aren't washed.)

Kate was getting all cocky, and repeatedly made mistakes. First she wasn't able to land properly, then she banged her shins on the tree roots, then she couldn't land on the far side of the water without getting pulled back, out of control.

We were at Stuhstaft Park in Redwood City at the site of Kate's current obsession: the rope swing. It's not much of a swing---just a rope that hangs conveniently over a 5-6' wide stretch of water, perfectly suited for launching out over the water. It's probably dangerous and there's no good way to test the rope for safety, but....there it is, and it's amazing.

I have a shiny new Nintendo 3DS at home. I haven't turned it on more than twice, but somehow I've managed to spend an hour and half every Friday tromping through this stream, jumping from rock to rock and swinging on ropes. It's like Mario Brothers, but we're doing it live.

We deemed it "Pokey Stick", a long branch I had acquired originally to poke at the bottom of the stream, but then used as a tripod leg to more easily leap from rock to rock. It was great, but at this point both of us had missed enough that our shoes were dripping wet.

We followed the stream around two big bends to find the end of the park, where it exited under a tumbledown barb wire fence into a deep channel heading straight to the bay. Uncontrolled erosion has exposed tree branches, cement post settings, and water pipes. The infrastructure in California is in such terrible repair that this all sits in benign neglect, resembling more and more a third-world country. 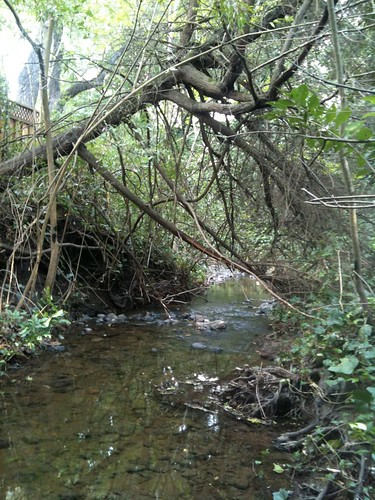 "Alright, listen up, people. Our fugitive has been on the slither for ninety minutes. Average belly speed over uneven ground barring injuries is 4 miles-per-hour. That gives us a radius of six miles. What I want from each and every one of you is a hard-target search of every gas station, residence, warehouse, farmhouse, henhouse, outhouse and doghouse in that area. Checkpoints go up at fifteen miles. Your fugitive's name is Mia the Cobra. Go get her."

I've had that phrase stuck in my head for several days now. All good things come to an end, I suppose, but for me the phrase is more from the last episode of Star Trek: Next Generation. It wasn't a great episode as these things go, but it hit the right note of nostalgia---this was a long, long journey we had been on together, and this was seeing them off. I had been watching ST:TNG since I had to stay up Sunday nights at 1am to watch it on UHF out of Des Moines, and I had grown from a kid who liked space ships into a seasoned fan.

Now, all good things, again. I'm taking LGGWG down. Most of you who read this know why, but I thought I'd touch on some things I had learned in the process.

1. LGGWG remains a great multiplayer game. It was exactly the sort of game I wanted to play, and for a handful of people it took off. We passed 52,000 turns submitted, and that means with conservative estimate at 3 minutes a turn we get 2600 hours played multiplayer, plus countless others in tutorials. (Well, I can count them, but I haven't yet.) Obviously, LT, the MotionPlus, and NBA2K* geometrically exceed that in terms of hours played, but 2600 hours is still a heavy number---hard to say, no, no one liked that game.

2. LGGWG was too damn hard to play. The end-game multiplayer was rich and nuanced, sure, but oh, what a learning curve. The give-orders, see-orders executed later thing works for veteran wargamers with analytical minds, but it's just a bit too much like programming for it to be easy to grasp. When I was designing the controls, I was sacrificing clarity for control and complexity, but I'm pretty sure there's a better local minimum out there. Next wargame will have a completely modal interface so you can figure it out just by clicking around randomly, EVEN AT THE COST OF GAMEPLAY.

3. Single player, for Odin's sake. It was clear a lot of people liked the game and the format, but were overwhelmed by joining the multiplayer free-for-all. Unfortunately, LGGWG is a little slow-paced played at speed against RoboBot, and the tutorials were too predictable---not enough exploration, not enough variety. Once you got past those first three tutorials, I think the remaining ones were meaty and interesting, but if I were to start over, I would start with the single player content immediately with an engineering eye towards supporting multiplayer, rather than trying to graft a single-player campaign onto an essentially multiplayer experience.

Plus, then I could sell the single player experience to single-players and widen my audience significantly.

4. People on the Internet are terrified of failure. Nearly every game of NewTown with anonymous newbies started with a bunch of apologies---oh, I just started, woo you're gonna beat me, blah blah. I knew that they were setting expectations so they could leave the game with their pride, but it was a clue that I needed some more gentle way of introducing newbies to the game.

That was a horrible, horrible movie.

The only interesting part was that I spent an hour and half wondering where I had seen Jennifer O'Neill before. Finally learned she was the Covergirl Makeup model for 30 years, so of course her face was burned into my consciousness from posters and billboards.

Getting S. to smile is tricky.

S., Kate's friend, age 7, has a stone poker face. Kate's all noise and personality, while S. will go blank in an unfamiliar situation and wait to see what happens.

She stayed over for dinner tonight and we hit Food Anxiety. Like, I want to stay for dinner, but the food will be *weird*. Worse, S.'s mother is a pediatrician, so when I poured out some potato chips she was like, no I don't want to get in trouble with my mother.

I told her I wouldn't tell her mom. She said, NO.

The Food Anxiety was big. She wanted a turkey sandwich, NO lettuce, NO ketchup, NO cheese. I produced a mostly-ripe avocado and she relented, but THAT WAS ALL.

She and Kate wandered off to play some more, and when I said, "Hey, I need some people who want to eat turkey sandwiches" they returned. "This one is for Kate," I said, placing a huge sandwich festooned with trimmings. "And this is for S.," I said, putting a flat, boring sandwich in front of her.

S. gave it the eye, total poker face. Seeing her look, I said, "It's only got turkey, avocado, and chilled monkey brains."

She went a little pale, but never broke expression.

I leaned close and whispered, "It really doesn't have chilled monkey brains."

Pause, and then we got it. First a guarded smile, and then a huge one of relief.

I have my ways.

It's an interesting game. It's brute-hard, in the sense that the game depends on your flawless execution of precision jumps, often timed.

At the same time, it's not very hard in that I bounced through the thing in 2.5 hours, and the longest I spent hung up on a room was around 5 minutes (a room universally ranked as a noticeable difficulty spike, I might add). Most of the hardest jumps in the game you can clear in about a minute or two because Cavanaugh, the Irish designer of the game, gives you basically instant respawns near everything tricky.

That's ridiculous, except that (from forum posts I found) I did about average. Cavanaugh reduced the cost for death to be so low as to not really matter, and although you thought, "I hate you, Terry" for a few traversals, it never really made me lose focus on the game.

My least-favorite feature was probably the floaty slowdown. Your character has just a touch of slowdown when you let go of the keys, and although you adjust to it, you get a lot of crap deaths sliding into a pit of spikes because you didn't quite let go at the right moment. However, as noted above, who cares?

It's not the game for everyone. It's hard, doubled by the number-pad control. Although I loved the 8-bit sensibility and the artistic use of color and shape, a lot of people don't get nostalgia seeing something that simple.

It's worth playing the demo, though, to see what he hath wrought.

In Fallout 3, level 20 was the max, and the game deflated like yesterdays balloon as soon as you reached it. Didn't matter how compelling the adventure content, when you ran out of perks and levels to get, it was like eating cookies made without sugar. It's hard to explain, but the illusion of progress in an adventure game is almost everything you need.

In New Vegas, the game runs to level 30, so I'm still climbing. I was having the height of fun this last few hours of gameplay---excellent characters, funny dialog, and a few actual puzzles in combat form. Like, there's a woman with a sniper rifle up high, surrounded by vicious dogs. What do you do? Just sniping her might work, except that if she sees you she shoots back.

Of course, it's still mess. It's ugly, both from a tech perspective and from an actual muddy-brown-rust-colored-textures-everywhere perspective. The game breaks its illusion of life constantly with dodgy animations, pops, flips, teleports, interpenetrations, etc. It's got bugs-a-plenty, with my AI companions locking up or getting lost all the time, out-of-order quest dialogs, and crazy NPCs who just start shooting at me or my friends for no discernable reason. It's hard crashed my XBox a few times, it's locked my direction, it's clearly leaking memory from moment to moment. A lot of the missions are make-workish fetch quests.

And yet, it's totally absorbing, and I'm sad to stop every night. It gives me this amazing sense of accomplishment, it's constantly rewarding me with new locations that, although constructed of the same 14 textures, somehow feel fresh. There's funny dialog, unexpected bits of detail, and genuine surprises in the plot. I'm addicted to following the hollow arrows on my compass to new locations.

I can see that playing as a Legion sympathizer would be an almost completely different experience, as the place is crawling with NCR troopers and anti-Legion quests. I'm faintly attempted to do it again, except I haven't slept properly in 2 weeks, so I don't need that.

I'm not playing tonight just so I can go to bed at a reasonable time, but it'll be hard to stay away.

1. Kate pointed out that SarahMac had a kid named Connor, so she should like this show.

2. They travel through time, then naked Summer Glau beats some football bros up to take their clothes. They missed a one-shot that one of the guys isn't wearing a San Dimas Football shirt, a la Bill & Ted.
Collapse